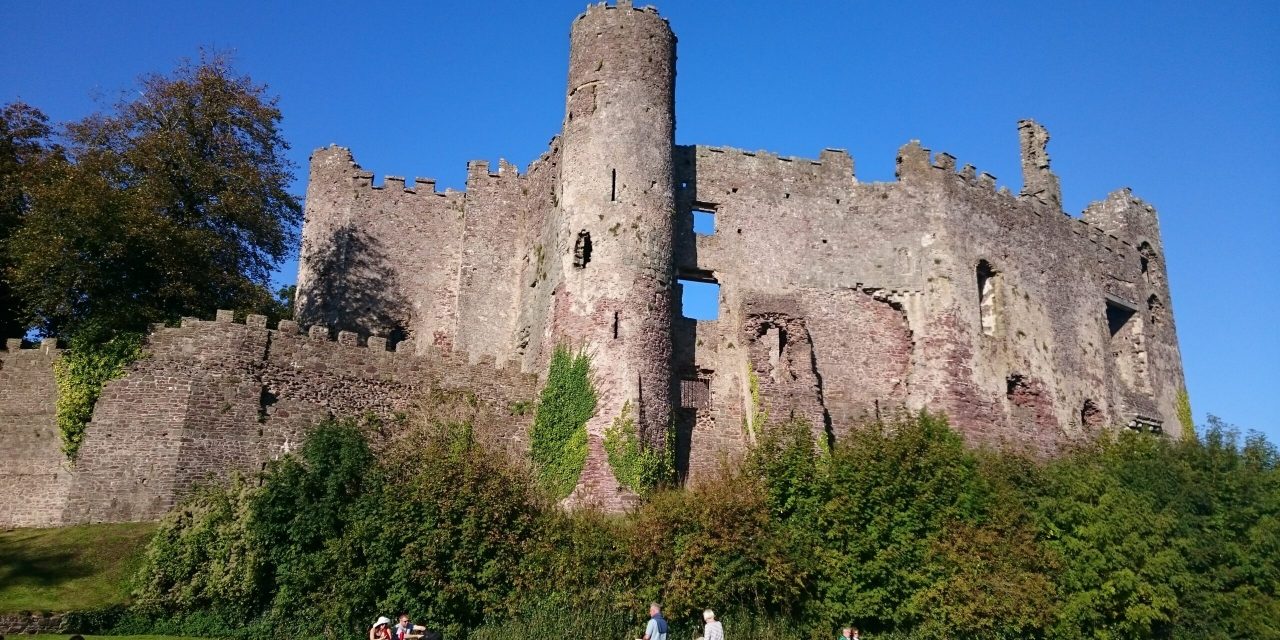 Are you a castle fanatic that is looking for their next adventure? If this is the case, somewhere that you might want to consider visiting is Laugharne Castle. The entry fee is more than reasonable, and the castle ruins are beautiful and surrounded by luscious scenery.

Laugharne Castle is an interesting location in terms of its history, and there is so much to learn about it. In this article, we are going to provide you with more information about the history of Laugharne Castle, and we are also going to tell you everything you need to know in order to best plan your visit.

It is thought that this castle was originally owned by Normans, but there are no records to confirm exactly who was the original owner of the castle. When the Normans arrived in south-west Wales in the late 11th century, Roger de Montgomery, the Earl of Shrewsbury, had seized Pembrokeshire. As well as this, Henry de Beaumont, the Earl of Warwick, had conquered the Gower peninsula.

Over the decades that followed, the Normans only continued to expand their territory in the region, and they did just this by building castles at key nodal points. Carmarthen Castle was one of the first to be built, and this was raised no later than 1094. Once this had evolved into a major Royal fortress under Henry I, further castle building began in Carmarthenshire.

Laugharne Castle was one of these new outposts, and it was actually built in order to secure the crossing over the River Taf. The castle had a relatively simple structure, and the south and west sides of the castle were protected by the river. The landward side had a ditch and earth rampart that was topped with a timber palisade.

A ringwork within this site was made up of a rampart and ditch that enclosed the Inner Ward. Even though this was a Norman military site that was intended to ensure control over the region, the first recorded reference to the castle is from 1116, which lists the custodian as Bleddyn ap Cedifor. He was a native Welshman that had sided with the invaders and was trusted to take charge of this key outpost.

When was Laugharne Castle built?

Laugharne Castle was built in the early 12th century as a small earthwork fortification that was defended by a ringwork enclosure. This castle was later extended and rebuilt in stone in the late 12th century, and it is possible that it is the  ‘Abercorram’ castle that was captured by Lord Rhys in 1189. If this is true, then it was destroyed by Llewelyn ap Lorweth in 1215, and it also suffered during a Welsh uprising in 1257, when it was held by the Norman de Brian family.

How much are tickets to Laugharne Castle?

The prices for tickets to go into Laugharne Castle are quite low, and we will leave a full price list for you to look at below.

If you are thinking about booking a family ticket, you should know that this covers the admission of two adults and up to three children. It is also worth knowing that all children that are under the age of 5 will receive free admission to the castle.

Are dogs allowed in Laugharne Castle?

Yes, dogs are welcome to enter the castle at the lower level grounds as long as they are kept on a lead.

Where in Wales is Laugharne?

Laugharne is a small town in Carmarthenshire, and you can find Laugharne Castle itself at King St, Laugharne, Carmarthen SA33 4SF.

What is there to see at Laugharne Castle?

There is lots to see when it comes to the ruins of this castle, which we will explain in more detail below. Laugharne Castle was raised in the 12th century so that it could serve as a fortress, and it was often upgraded in the two centuries that followed. Some original elements of this castle survived, including the round towers of the inner ward, the outer ward gatehouse, and some parts of the curtain walls.

Other parts of the structure date back to a substantial rebuild in the late 16th century, which is when the castle was converted into an Elizabethan mansion. The remains that you can go and see today reflect a lot of the destruction that occurred during the Civil War.

The castle itself was built on the east bank of the River Taf, and it consisted of both inner and outer wards. Even though this site was rebuilt in the 16th century, the general layout of the castle remained very similar.

The two-storey gatehouse that you can still see today dates back to the 13th century, and it is thought that it had replaced an earlier structure that was probably made of timber. The front of the gatehouse was destroyed by artillery fire during the 1644 siege.

The original gatehouse was built in the late 13th century, but it had a complete restyle in the 1580s. This rebuild included the addition of the large windows and entrance arch.

There are two round towers in the inner ward, and these were built by Guy de Brian in the 13th century. The north-west tower had served as the keep, and the north-east tower was originally smaller, but it was made taller in the 16th century.

Were there any battles at Laugharne Castle?

The original castle was established by the year 1116 as the castle of Robert Courtemain, who is recorded to have placed the care of the castle in the hands of Welshman Bleddyn ap Cedifor. This castle also became the meeting place of Henry II of England and Rhys ap Gruffudd from 1171 to 1172. This is where they agreed on a treaty of peace.

However, when Henry II of England died in 1189, the castle, among others, was seized by Rhys ap Gruffudd of Deheubarth in the same year. It is also thought that the castle could have been burnt down at this time. After this, it was rebuilt by the Normans, but it was then captured in 1215 by  Llywelyn the Great in his campaign across South Wales.

By 1247, Laugharne Castle was passed over to the De Brian family, and in 1257, Guy de Brian was captured at the castle by Llywelyn ap Gruffudd and the castle was destroyed.

In 1403, Owain Glyndŵr’s rebellion was stalled, and he was tricked by an ambush that resulted in the loss of 700 men. He was warned to either leave the area or be captured, and so he retreated. After this point, the rebellion died out due to greater English numbers, and by 1415, Owain Glyndŵr had disappeared.

In the year 1584, Queen Elizabeth granted Laugharne Castle to Sir John Perrot, who was actually rumoured to have been an illegitimate son of Henry VIII. He was the one that converted the castle from a fortification into a Tudor mansion.

At the time of the Civil War in 1644, Laugharne Castle was captured by Royalists, but then it was later attacked by the Parliamentary forces of Major-General Rowland Laugharne. In a siege that took a week, a lot of the castle was damaged by cannon fire, and the Royalist garrison finally surrendered. The castle was then slighted to prevent it from being used again.

In around 1730, the new Castle House was built near to the castle, but the castle itself was left as a ruin. Around the start of the 19th century, the outer ward was laid out as formal gardens.

Is Laugharne Castle a ruin?

Laugharne Castle is a ruin, and from these ruins, there is little trace left of the original earthwork bank or the first stone hall., which was likely taken down in the 12th century. The two towers of the castle date back to the rebuilding work that took place in the late 13th century, and some of the curtain walling from this time also still remains.

The north-west tower not only acted as a keep, but it also guarded the entry gate through the curtain wall to its south. The tower has a domed roof, but the other three-storey tower has partially collapsed. The two extra storeys and the circular stairway were probably built in the late 13th century, and a new hall was also built at this time against the south of the curtain wall.

The outer ward and its timber defences might also date from this period. More work that was completed in the late 13th century also included an additional round tower at the south-west corner of the inner ward, and a new, stronger gatehouse. The defences of the outer ward were also rebuilt in stone.

During the mid-14th century, the curtain walling at the south-western corner of the inner ward was extended in height, and the round tower and inner gatehouse were also made taller. In the 16th century, the castle was remodelled to be made into a Tudor mansion with a nicer accommodation block and mock battlements that were added to the curtain walls. Excavation has shown the remains of the Tudor cobbled courtyard. 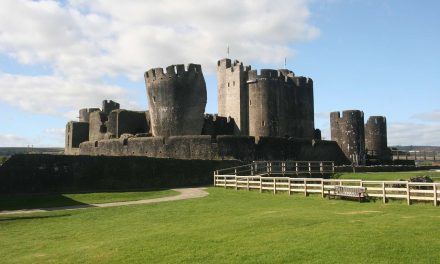 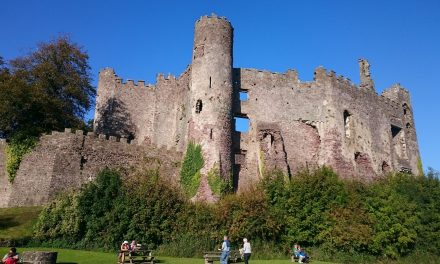 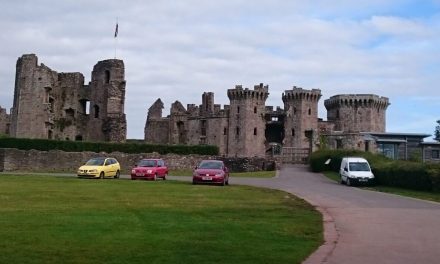 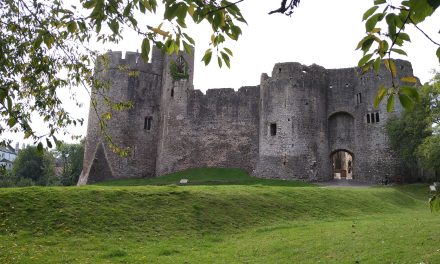