Frozen Charlotte is a white porcelain doll created in the 18th century in Germany. The frozen charlotte doll was created initially as an innocent bath time novelty, but its arrival in the United States in the mid-1800s reminded people about the story of frozen charlotte.

The story published in the New York Observer on Feb. 8, 1840, described a woman who froze to death while travelling 20 miles in an open sleigh to a New Year’s ball. A ballad titled fair Charlotte and the poem a corpse going to a ball written by Seba Smith helped spread the story further.

Charlotte was a beautiful young woman who could not walk past a mirror without stopping to admire herself. She liked to wear low-cut dresses that showed off her lovely neck and shoulders. She liked to be admired by others, enjoying the compliments they gave her. She was an only child and grew up in a wealthy family that spoilt her with fine dresses and accessories.

The story of the frozen charlotte

New Year’s Day 1840 was fast approaching. There would be a ball to celebrate, which Charlotte was very excited about attending, and she picked out a beautiful gown that she knew would capture everyone’s attention.

Charlotte would be attending the ball with her companion Charles, who had arranged to take her to the ball in a horse-drawn sleigh. The weather had turned freezing and windy, so he bundled up warm enough for the trip. On his arrival, he was greeted by Charlotte, who wasn’t wearing a coat. Charlotte, who wanted to show off her beautiful gown on the way to the ball, was cautioned to dress warmly for the journey by her mother,  but her vanity got the better of her. Her mother pleaded;

“Now, Daughter dear, put this blanket around you for it’s a dreadful night, and you’ll catch your death of cold.” Charlotte responded, “Nay, Mother, nay. To ride in blankets muffled up, I never would be seen.”

Charles offered her another blanket from inside the sleigh, “Pleading with her to wrap herself in it;

” Charlotte rolled her eyes and said, “I’d smell like a horse by the time I reached the ball if I used your old carriage blanket to keep warm. My silk cloak is quite enough.”

Charlotte insisted they leave for the ball and climbed into the sleigh. Charles agreed, and off they went into the cold and frosty night. During the trip, Charles notices Charlotte is slumped over and shivering. He could barely hold the reins because he was so cold, so he couldn’t imagine how cold she was. With five miles left of the trip, Charles urges his horse to go faster. When they arrive at the ball, he finds Charlotte cold and stiff, and he realises she is dead. Instead of being the belle of the ball capturing everyone’s attention, she became the corpse of the ball. Charles was so overwhelmed with his grief he died of a broken heart. Charlotte and Charles would once again be reunited, buried side-by-side in their village cemetery.

The story was so famous that when the white dolls were introduced to the US, they were given the name Frozen Charlotte because they resembled tiny, white corpses. The male versions of the frozen charlottes were called Frozen Charlies. Some of these dolls were sold in caskets to represent a corpse, and they were also baked into cakes. It was said that whoever received the piece of cake with the frozen charlotte would have good fortune. The manufacturing of frozen Charlotte dolls lasted for many years, but the popularity dwindled during the early 20th century, and they were no longer admired.

There were many different sizes and styles of these dolls; some even had clothes; the classic Frozen Charlotte doll was nude.

As with most things from that era, frozen charlottes weren’t expensive to buy, so they were discarded quite often; these days, they are considered quite collectable. They usually wash up on beaches and river banks. They can also be found in old victorian rubbish dumps too.

Young Charlotte lived by the mountainside, In a lonely, dreary spot; No other dwelling for three miles round, Except her father’s cot. And yet on many a winter’s eve, Young swains would gather there, For her father kept a social abode, And she was very fair.

Her father liked to see her dressed, Just like some city belle; She was the only child he had. He loved his daughter well. Her hair was black as raven’s wings, Her skin was lily fair, And her teeth were like the pearls of white, None with her could compare.

At a village just sixteen miles off, There’s a merry ball tonight. Although the air is freezing cold, Her heart is warm and light. And there she watched with an anxious look, ’Til a well-known voice she heard, And driving up to the cottage door, Young Charles in his sleigh appeared.

The mother to her daughter said, “These blankets round you fold; For it is a dreadful night, you know, You’ll catch your death of cold.” “Oh, no! Oh, no!” the darling cried; she laughed like a gypsy queen, “For to ride in blankets muffled up, I never could be seen.”

“My silken cloak, it’s quite enough–You know it’s lined throughout. Besides, I have a silk mantle, To tie my face about.” The gloves and bonnet being on, They jumped into the sleigh, And away they did ride o’er the mountainside And the hills so far away.

There is music in the sounds of bells, As over the hills they go; What a creaking wake the runners make, As they bite the frozen snow. And away they then go silently, ’Til five cold miles were passed, And Charles with these few frozen words, The silence broke at last.

“Such a night as this I never knew, My lines I scarce can hold.” With a trembling voice, young Charlotte cried, “I am exceeding cold.” He cracked the whip, he urged his steed, Much faster than before, Until at last five other cold miles, In silence they rode o’er.

“How very fast the freezing air, Is gathering on my brow.” With a trembling voice, young Charlotte cried, “I’m growing warmer now.” And away they did ride o’er the mountainside, And through the pale starlight, Until the village inn they reached, And the ballroom hove in sight.

When they reached the inn, young Charles jumped out, And gave his hand to her, “Why sit you there like a monument, And have no power to stir?” He called her once, he called her twice, She answered not a word; He called all for her hand again, But still, she never stirred.

He stripped the mantle off her brow, And the pale stars on her shone, And quickly into the lighted hall, Her helpless form was born. They tried all within their power, Her life for to restore, But Charlotte was a frozen corpse And is never to speak more.

He threw himself down by her side, And the bitter tears did flow, He said, “My dear and intended bride, You never more shall know.” He threw his arms around her neck, He kissed her marble brow, And his thoughts went back to the place where she said, “I am growing warmer now.”

They bore her out into the sleigh, And Charles with her rode home, And when they reached the cottage door, Oh, how her parents mourned! They mourned the loss of their daughter dear, And Charles mourned o’er her doom Until at last, his heart did break, Now they both slumber in one tomb. 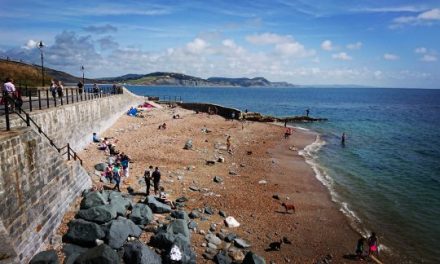 What is seaglass worth?